Earlier in the week came the news of a 16-year-old girl who was gifted a Mercedes Benz, iWatch and Iphone X Max by her boyfriend on her birthday.

Her boyfriend, a 19-year-old boy, was featured in a video that showed the boy leading the girl to her gifts and on seeing it, she gasped and was very pleased indeed.

It seems that things have unravelled though, as Twitter users who are familiar with the subjects of the video report that the girl’s parents were left unimpressed with her expensive gifts and beat her because of them.

It was also alleged that the boy stole money to purchase the gifts.

According to @Nabeelah_Abdull, she said: So I heard zubairu and his babe got the beating of their lifelord where are the zubairu goal keepers?? it’s arewa what do you expect not some whites

Yes yess. Their parents didn’t betray arewa culture oooo. Zubairu stole the money they said so nobody will want their guy to be like that now I guess. Wai ma he stole his brother in law’s money ne niggha got courage forgetting it will go viral

Another Twitter user, @Perfectskones, said: Lol the Mercedes bae and his 16yr old girlfriend were beaten mercilessly by their parents because he stole the money. The guy was Goals already for girls who see men as nothing but a poverty relief program 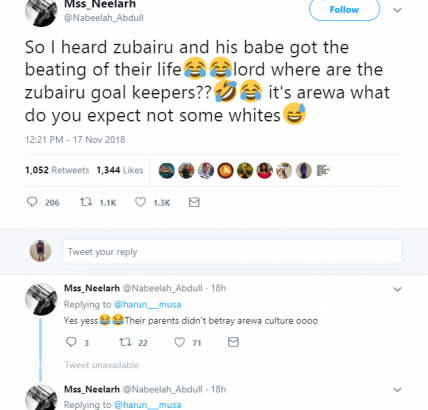 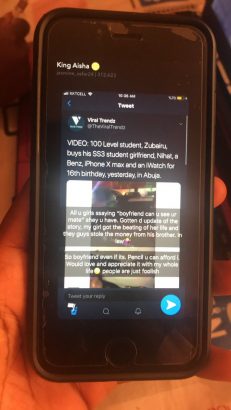 Big Lesson I Learned After My 2 Wives Left Me – Mr. Ibu Reveals (Video)
Primary School teacher Lands In trouble for doing this in class (Video)
To Top
Open