This might be one of the breathtaking archeological discoveries made in the recent past: the almost 4,800-year-old fossil remains of a mother cradling her baby in a shared grave.

While excavating a prehistoric Taiwanese aboriginal mass-burial site discovered in Taichung, Taiwan, archeologists discovered the remains of a young mother and her child.

They were amongst the 48 sets of neatly laid out skeletal remains that were recovered way back in 2014, according to Reuters.

These archeological findings turned out to be the earliest signs of human activity found in central Taiwan. But what caught the attention of the archeologists was the remains of the mother and child. 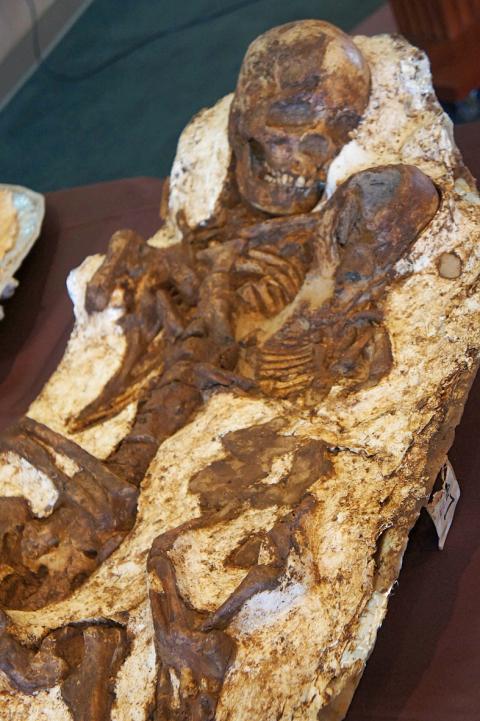 “When it was unearthed, all of the archeologists and staff members were shocked,” Dr. Chu Whei-lee, curator and director of the Anthropology Department at Taiwan’s National Museum of Natural Science, told Reuters.

“Why? Because the mother was looking down at the baby in her hands.”

The mother was a young female estimated to be between 20 and 25 years of age, and 5 feet 2 inches (1.6 meters) tall. She cradled a baby in her left arm and was gazing down at it.

Initially, they thought the child had died from miscarriage or difficult labor, but they subsequently determined from its height (a foot and a half, 50 cm) and bones that the infant was 6 months old, and both mother and child probably died together, according to United Daily.

How they died and what happened then remains a mystery.

The burial site was discovered when test digging of the area was conducted by a property developer before construction began.

The excavation began in May 2014 and took a year to complete. Carbon-14 dating was used to determine the age of the findings, which included 4,000 ceramic fragments and 200 shark teeth. The area was probably near the shoreline back then.

The remains were found to be around 4,800–5,000 years old, dating back to the early-to-mid Neolithic Age, and part of Dapenkeng culture. These findings are 1,000 years older than previously discovered findings. Men were in charge of fishing and hunting, while women used stone tools to harvest crops, according to NMNS.

The burial site, now called the “Ruins of Anhe,” is located near the intersection of Anhe Road, Taiwan Boulevard, and Chaoma Road in Taichung, reported Taipei Times.

The mother is dubbed “Taichung City’s Earliest Mother” and NMNS has produced a YouTube video about the archeological findings, called “Taichung 5,000 years ago—Story of a Mother in Anhe.”

Youths give energy drink to thief so they can beat him again (video)
“Why I can’t stop Having S£X in my life” – Actress, Tonto Dikeh tells us (Video)
To Top
Open