A Nigerian man has taken to Twitter to narrate how his wife got him arrested for slapping her.

@YTafiya_Jnr who justified his action by stating that “wife materials” have been lost, also asked why “woke generation can’t endure like their mothers”.

Recounting how surprised he was when the police stormed his office to arrest him, the Twitter user also disclosed that his mother always apologized to his father after being slapped by him.

I slapped my wife and she had the guts to arrest me with police, because of one correctional slap? I was so surprised when the police stormed my office to arrest me, We have lost wife materials, it’s funny how this Woke generation can’t endure like our mother’s.

She had me arrested and had the nerves to remain in my house, it’s the audacity for me? My father slapped my mom and she never had him arrested, instead she apologize like the good wife she is, then cooked and to wash his clothes. But now it’s pathetic that we can’t correct them. 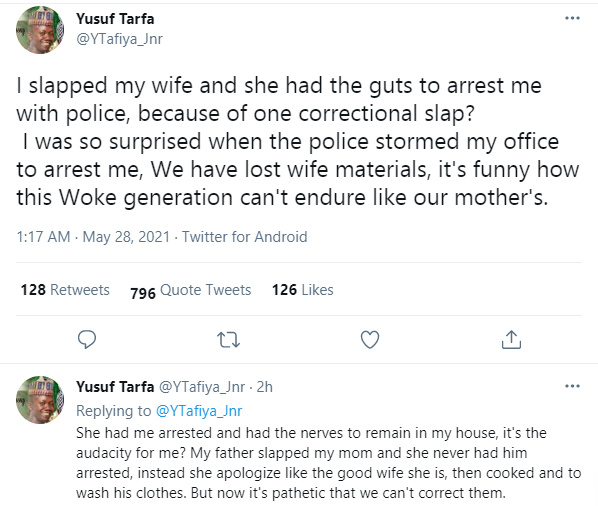 Mavin Artisi Ayra Starr Removed Her Top, Shows Fans Her “oranges” While performing at an event (Video)
Lady narrates how she used candlelight to prepare food for her baby in a bid to prevent her from sleeping hungry (Photos)
To Top
Open