News recalls that on the 31st of August 2021, Bobrisky hosted top Nigerian celebrities and popular fuji musician KWAM1 on his 30th birthday, which got the social media buzzing with several reactions.

Meanwhile, an Instagram blogger Gistlovers has alleged that Bobrisky borrowed N20 million from an anonymous Abuja Babe who has promised to call out Bobrisky anytime soon.

However, Bobrisky has been pleading with the lady, saying that his bank account has been frozen after the blogger exposed his ongoing court case.

The anonymous blogger added that the money Borisky was sprayed during his 30th birthday is still under lock and key in his house, and he has refused to take it to the bank over the fear of not being able to access his bank account.

The blogger wrote: Who write biro for Bob shoulder. Information reaching Vawulence Headquarters be say another Gbas Gbos is about to happen o, where Idris go borrow 20m to do birthday, the lady wants to remain anonymous, na Abuja Babe and she say she wan drag Una Shim.

The excuse wey shim give am he say as I don post that him court case say Court don freeze him account ,my Dear aunty mumu wey Dey borrow person money to do birthday.

Nobody freezed Idris account, he knows they are about to freeze it, even money wey them spray am for the birthday, still dey him house locked up in a room and he didn’t allow his cleaner go near the room because of fear dey him body say them fit freeze him account.

READ ALSO:  ‘My ass is in pains’ Bobrisky cries out from the hospital bed

I go soon drop Idris address make all of Una go collect Una share for inside the money, But first make Idris go give that lady him money,Una see where fake life push Idris reach,Cut your coat according to your size,No let fake life and fake alert push you to your early gr*ve ,YOU ARE A BOSS,YOU ARE DOING WELL 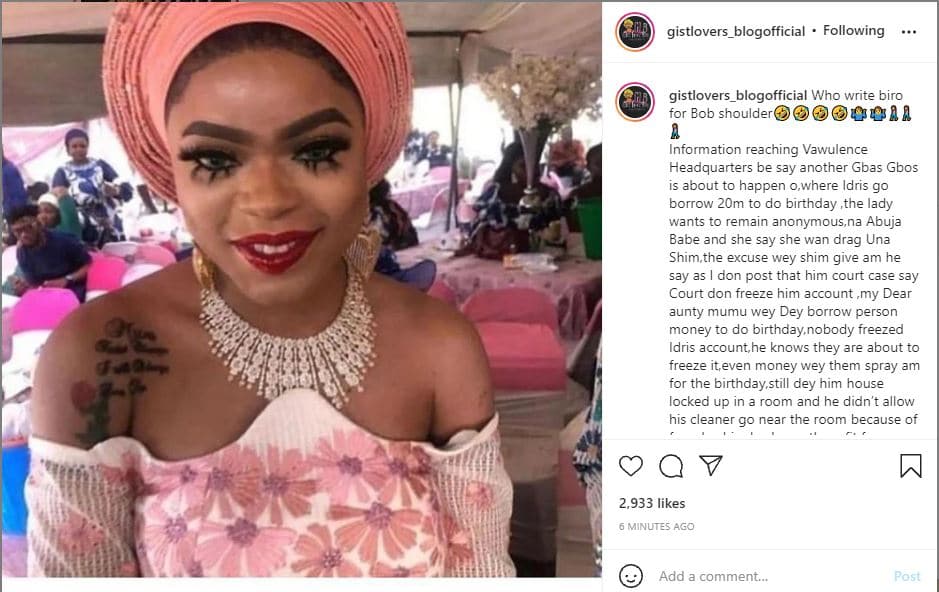